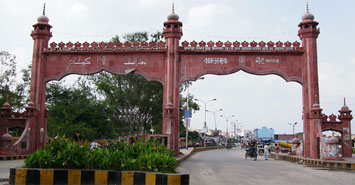 Situated in Uttar Pradesh, Amroha is a town located close to the Sot River. The town is the district headquarters of Amroha district. A city with significant historic significance, Battle of Amroha was fought here during Alauddin Khilji’s reign. Amroha is named after mangoes (aam) and a variety of fish (Rohu). Amroha was earlier part of Moradababd district and was under Delhi province during Akbar’s reign.

The city is known for its monuments that date back to the Slave Dynasty. Amroha’s existence could be traced back to 479 BC when Raja Amarjoda from the Bansi dynasty ruled the area. Tarik-i-Amroha is one of the important scriptures preserving crucial information about the town’s history. It mentions Amroha being a Hindu kingdom ruled between 676 and 1141 AD by Rajput rulers. It was conquered by Mahmud of Ghazni in 1093 AD. Syed Mohammad Ahraf Taqvi Sahib was bestowed with the title to “Danishmand” but he Mughal Emperor Babar. He settled down in Amroha and the place is now called Danisdmandan. The area is still inhabited by his descendants and is known for being home to some of the beautiful monuments constructed by the family. Read More

The town of Amroha is located to the close proximity of river Sot in the North Western part of Uttar Pradesh. It has rail connectivity with the national capital Delhi and the nearest city is Moradababd. It is located between Latitude 28°54'15.95"N and longitude 78°28'3.10"E.

The climate of Amroha is similar to other towns situated below the might Himalayas. It remains hot during summer and experiences chilling cold during winter.

Places of Tourist Interest in Amroha

Mosques, imambaras, idgahs, diwan khana, khanqash, madrasas, temples, dargahs, forts and gates built during the Sultanate and Mughal period are one of the main attractions of the city today.

Amroha is the centre for many festivities. With its existence beyond 2400 years it is one of the oldest cities in the planet. An excellent example of Ganga-Jamuna tahzeeb, Amroha celebrates many festivals across the year. The prominent among these include

How to Reach Amroha

Amroha is conncted to rest of India by rail and road. It lies in close proximity to NH 24. Located between Delhi and Moradabad the town has sound rail connectivity as well.

Amroha is known for its mangoes and fish. The other prominent industries are pottery and handloom. Wooden handicrafts and carpet weaving are other source of income for people of Amroha.