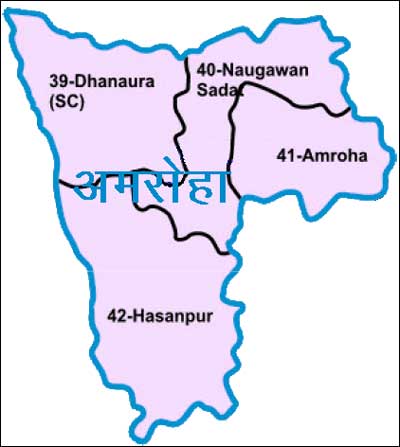 The town of Amroha has been known since 479 BC, from the days of Raja Amrjoda of the Bansi Dynasty. One of the Rajput provinces in Ancient period it became a province of the Delhi sultanate during the medieval India. Later it went under the Mughals. For brief it was under the rule of Nawab of Awadh before it became a territory of the British East India Company in 1801.

One of the 72 districts of Uttar Pradesh, the two serves as the district headquarters of the Amroha district. The town of Amroha has many historical monuments and is a popular tourist destination. Mazaar of Shah Waliyat, the Imabada Wazir-Un-Nisa and the Vasudev Temple and Tulsi park are some of the important attraction of Amroha.

The maximum and minimum height of Amroha above the sea level varies between 240-177 ft. Towards the north Amroha touches the borders of Bijnor while on its south lies the Sambhal tehsil of Moradabad. Sadar tehsil of Moradabad lies on its east while towards the south lies the districts of Meerut, Ghaziabad and Bulandshahar. River Ganga flowing in between separates it from Bulandshahr, Meerut and Ghaziabad.

Amroha experiences extreme climate like most of Northern India. The winters here are biting cold, it extends from November to March. This is the most ideal time to visit Amroha. Summer season is very hot and runs between April to June. It rains in Amroha from July to August. Autumn falls between August to October.

As per the census collected in 2011 Amroha has a population of 197,135. The male population of the town comprises of 102, 804 while the females are 94,331. The gender rtio is 906. The percentage decadal growth rate of UP has been 22.66%. The population density of the town 818 is lower than the average of the state. The literacy rate is 65.7% with male literacy rate being 76.53 % and that of woman is 53.77%. Amroha is one of the minority concentrated area of India. 70% of the total population is Muslim including both Sunni and the Shi’a sect. Other religions present in the town include Hindu, Christians and Sikhs. Population of Hindus is majorly dominated by the Jats.