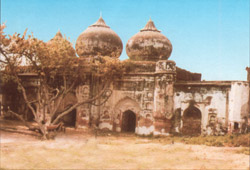 Amroha is one of the historic towns located in Moradabad sub-division in Uttar Pradesh. The town serves as the headquarters of Amroha district. The city got its name from the mangoes and rohu a variety of fish. Surnames like Amrohi and Amrohvi are used by people from Amroha. A town with 70% Muslim population, it is one of the best examples of secularism in the world. The existence of the town goes beyond 2400 years and has an interesting history.

The town of Amroha was most probably founded during the rule of Raja Amarjada of Bansi Dynasty in 479 B.C. It was carved out of the Hastanapur. 5 kilometers from the present town of Amroha, there is still a town called Gajasthal, it was used by Raja Amarjada for keeping his elephants.
Tarikh-i-Amrohi is an important manuscript that informs us about the history of the town. It mentions Amroha as a Hindu state. Rajput rulers ruled Amroha from 676-1141 AD.

Amroha was attacked and plundered by Mahmud of Ghazni in 1093 AD. Malik Jalaluddin was appointed Amroha’s Hakim by Behram Shah of the Shah dynasty. Ghiyasuddin Balaban of the Slave Dynasty suppressed one of the rebellions here with sheer ruthlessness making the areas of Amroha and Badaun quiescent for long. Normalcy was restored here only during the reign of Jalaluddin Khalji. A beautiful mosque was built in Amroha by Ambar Sultani.

The town of Amroha turned out to be a battlefield during the reign of Alauddin Khalji. The battle of Amroha was fought here between Khalji’s generals Malik Tughlaq and Malik and the Mongols.
Amroha was assigned - Iqta system was prevalent in Amroha during that time - to Saiyid Salim and then to his sons after his death. Alauddin Khalji punished Khizr Khan here by a forceful extended stay with Hisamuddin. Read More about Battle of Amroha

The journey of historical monuments in Amroha commences with Fort Wall of the city, its ramparts are visible till today. Moradabadi Darwaza, the only gate, was constructed in 1642, during Shah Jahan's reign by Saiyid Abdul Majid. This 50-ft-high edifice was built along three-pillared arches. There are many other monuments in the town like mosques, azakhanas, imambaras, idgahs, diwan khana, dargahs, temples and madarsas that still remind us of the days of Delhi Sultanate.

History of Amroha cannot be complete without mention of Shah Waliyat Sahab. He was Saiyad Mohammad Saeed Khan's son and was born in Nahthor. A descendant of Imam Ali al-Hadi an-Naqi, he migrated to India from Wasit in Iraq. Impressed with his intellectual abilities he was conferred with the title of Danishmandan by the first Mughal Emperor, Babur. A Sufi Saint, Waliyat Sahab settled down in one of the localities in Amroha that came to be known as Danishmandan. His descendants are inhabited in the area still today. On his death in 1644 AD, he was buried here. His tomb is revered as a Dargah and is visited by hundred of visitors daily.

Dasnishmandan is home to many historical monuments that include Mazaar Shah Waliyat Sahab, Imambargah Wazir-Un-Nisa and Mazaar Imam Bargah e Akbar Ali Khan. Imambargah is an impressive edifice built by Musammat Wazeer-un-Nisa for her daughter around 1811 AD. In 1946, it was almost re-built by Saiyad Mehdi Raza Taqvi. At present the monument is looked after by Syed Hadi Raza Taqvi. The azakhana is home to the town’s oldest Madarsa, Noor Ul Madaris that continues to run here still today.