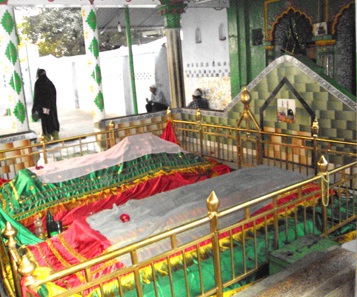 Dargah of Syed Hussain Shrafuddin Shah Wilayat is one of the main tourist attractions in Amroha. Tourists from across India come to get the blessings of this Sufi Saint who was a contemporary of first Mughal Emperor, Babar. In the Dargah premises still today scorpions induce no harms to visitors, it is said that the power of Shah Wilayat prevent them from doing so. Annual Urs is organized here every year to celebrate the birth of Shah Wilayat Sahib and it creates an ambience of festival in Amroha. The Dargah is located in Danishmandan, the locality where Shah Wilayat Sahib resided in Amroha.

Syed Hussain Sharfuddin Shah Wilayat was born to Mira Ali Buzurg and Umme Habeeba. His father was a renowned scholar of his time. Her mother was the daughter of Syed Abdul Moueed Ali while Syed Jalaluddin Haider Surkh Posh, an eminent Sufi Saint during the Delhi Sultanate was her real brother.

Hazrat Hussain Sharfuddin Shah Wilayat doesn’t find much mention in the books on Sufi Movement in India. The reason probably being his father let a life of austerity and ascetic in the little known town of Amroha which was then known as Qasba Azizipore. He kept away from the hustle bustles of royal towns like Delhi and Agra and chose Amroha as his abode.

Both parents of Shah Wilayat Sahib were descendants of the 10th Imam Ali al-Naqi al-Hadi. Imam was a contemporary of Abbasid rulers AlWathiq and Al Mutawakkil. They felt insecured about the growing popularity of Imam in normal Muslim households. Imam was called by them from the town of Madian and was sentenced behind bars at prison in Samrrah, Iraq. He died young at the mere age of 42 leaving behind five children on 3rd Rajab 252 AH. His children included

Shah Wilayat Sahib’s ancestors travelled to Sauda in Syria and later on to Wasit in Iraq. The town of Wasit was settled in 83 AH by Hajjaj Bin Yusuf on the banks of River Dajla. Early member of his family continued living in Wasit until the town encountered serious water and administrative issues.

His parents had four children, three sons and a daughter

Two of his siblings Bibi Umme Salema and Syed Hasan died before adulthood. The family left their ancestral properties and moved to Bhakkar in Multan in present day to Pakistan in search of livelihood.

According to many historians, Shah Wilayat Sahib along with his father and other members of the family came to India in 670 AH, 2nd Zil Hij or Wednesday, 29th June 1272 AD and settled down in the town of Amroha.

As baby Sharfuddin received his primary education of Dard-e-Quran and Hadith from his father at home. He was also taugh and mentored by revered Sufi Saints of the time Arif Suharwardi and Syed Usman Lal Shahbaz Qalander aka Jhulewala. He received his spiritual education from Syed Jalaluddin and Syed Bahuddin, the father-in-law of Syed Jalaluddin and Moulana Nasehuddin Suharwardi.

The area from River Ganges to Kumayun Hills was given to him as the land for spreading his spiritual knowledge by his mentors. For all his life he lived a simple life in austerity. He gave the message of respect and love to the world. He was revered and loved by people of all religions and faith. Mughal Emperor Babar was extremely impressed with Shah Wilayat Sahib’s intellectual abilities and honored him with the title of Danishmand. The area where he used to live in Amroha came to be known as Danishmandan and it still continues to be one of the important and busy localities of the town. His descendants still resides in Danishmandan and is carrying forward the great family lineage.

His family initially settled down in Mohalla Pachdara of Amroha according to the Tareek-e-Wastiya a book on Amroha history. He married Bibi Kaneez Fatima, the daughter of his mentor Syed Jalaluddin Bukhari. Together they had three children


His daughter was loved by the masses for her simplicity, grace and devotion to god. Her tomb is the first one that comes the way in the premises of the Daragah of Shah Wilayat Sahib. There are not many records available about the time period Wilayat Sahib lived in Amroha and then left in for meditation to the hills in Kumayun. He went there to get Riyazat, Chillakashi and to offer special prayers. His life of a hermit earned him the title of peer Pahar of the Saint of the Hills.

During the time of his stay in those hills he planted many trees giving them a shape of a ‘Machan’. When he came back to Amroha, he brought back some of those trees. One among them is believed to have survived still today and can be seen offering shade to the shrine where the Saint is resting. During his entire lifetime he went to Mecca Sharif seven times for Haj.

He left for heavenly adobe on 21st Rajab 739 AH and his tomb was built in Danishmandan in present Amroha.

Syed Mohammed Abdal Dooda Dhari worked in close association with Shah Wilayat Sahab and was the probable heir. But before his death Waliayat Sahab had instructed the costume of appointing an heir to be discontinued from his lineage forever. When Dooda Dhari Sahab passed away in 798 AH, all the holy scriptures and other belongings of Shah Wilayat Sahab were buried along with him.

Explore more about Tourism in Amroha