* In case of any delay in receiving the OTP, you may verify it later. Please proceed without verification.

Your mobile number is not registered with us. Please register your mobile no.

The town of Amroha with its history dating back to 2400 years is an interesting tourist destination. Amroha was initially rule by Rajput rulers before Mahmud of Ghajni conquered this and the area came under Delhi Sultanate. Later it went under Mughal Rule. Each of the dynasties that have ruled in Amroha has gifted it with numerous monuments. It was inhabited by many Sufi Saints and tourists from across India come here today to these dargahs for ziyarat. 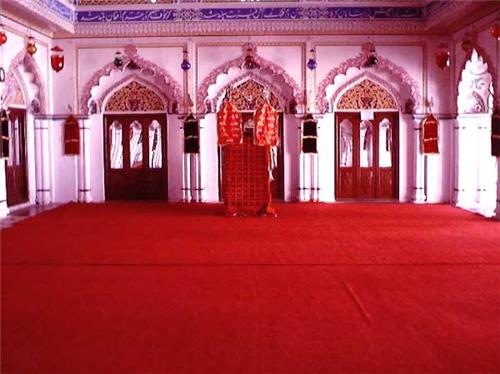 Impressed with the intellect of Syed Mohammad Ashraf Taqvi Sahib, Mughal Emperor Babur conferred him with the title of Danishmand. He came from all the way from Iraq and settled down in Amroha and the area came to be known as Danishmandan. His tomb still exists in the area and is a major tourist attraction. One of the popular beliefs about this Dargah is that because of the power of the holy saint scorpions present here induce no harm to visitors within the Dargah premises.

Mazaar Shah Valiyaat Sahib is located in one of the most popular area of Amroha, Danishmandan.

Best time to visit
The Dargah remains open for pilgrims all through the day but the ideal time to visit this place is evening when Sufi Qwalis can be enjoyed.

This beautiful monument along with a mosque was built by Wazeer-un Nisa in the loving memory of her beloved daughter around 1811. Saiyad Mehdi Raza Taqvi rebuilt the Imambargah in 1946 an it is managed today by Syed Hadi Raza Taqvi one of the descendants of Syed Mohammad Ashraf Danishmand. It is home to Noor-ul Madaris one of the oldest Madarsas.

Imambargah is located in Danishmaandan locality of Amroha.

Best time to visit
Imambargah remains open for tourists all through the year. The most ideal months to visit the monument are between the months of November to March.

Tomb of Khwaja Nasiruddin Sahab is one of the most popular shrines in Amroha. It is consider pious even by the animals that restrict themselves from passing their stools here. It is believed that in case anyone has lost their livestock this is the place that reunites those creatures with their owner.

Mazaar of Khwaja Nasiruddin Sahab is one of the known places in Amroha. Rickshaws and autos are available from Amroha bus stand and railway station to this place.

Best time to visit
The Dargah remain opens all through the day for visitors.

This temple is dedicated to Lord Krishna and is also known as the Vasudev Tirtha. The existence of this temple dates back to 500 BC and was earlier known as the Baba Batukeshwar Dham. The temple is known for the 51-ft Shivaling that was erected here recently. The temple is an ideal place for secularism, here is a gurudwara within its premises, a park called Tulsi park and the tomb of Mira Baba.

Autos and Rickshaws are available for the temple from any of the localities of Amroha.

Best time to visit
The temple is closed in the noon and after 8:00 pm. The ideal time to visit the temple is early morning hours and during the evening when Aarti is conducted. Along with this while on a tour to Amroha tourists can visit Baiyen Ka Kuan that is an interesting well, Dargah of Sufi Saint Bhure Shah, Dargah of Hazrath Shah Abdul Hadi and Dargah of Hazrath Shah Abban Badr Chisti.


Explore more about Tourism in Amroha